Why Indian Reservations Have Many Casinos

There are many Indian casinos in the US.

On average, the nearest Indian casino is about three hours away regardless of your location in the US.

Why do Indian casinos emerge in the US every year?

Helen and Russell Bryan are known as the pioneers of Indian gambling in the United States.

Everything started about five decades ago when Itasca County tried to impose a tax on the couple’s house on an Indian reservation.

They had to appeal several times before the Supreme Court favored them.

According to Justice Brennan, states don’t have the power to regulate Indian reservations.

The ruling attracted the attention of other Indian tribes across the country.

As a result, Indian communities realized they could engage in gambling and other activities that are illegal according to state laws.

In Florida, the Seminoles were the first people to take action.

They built a bingo facility with the permission of their chief and many players were delighted because Florida is known for its strict gambling regulations.

People started to play games 6 days every week and could win jackpots worth more than the maximum amount of $100.

The Seminoles made enough money and improved their services.

Every ruling favored Indian casinos and states such as Florida and California were not happy with the rulings.

This lead to the establishment of the Indian Gaming Regulatory Act in 1988.

According to this law, Indian reservations have the power to control most of their gaming activities.

However, tribes and states must come to an agreement before engaging in Class III games.

Indian casinos are now popular because the courts ruled in favor of Indian reservations.

Moreover, these and Canadian casinos are prevalent because they generate a lot of money.

Although Indian gambling is a widespread activity in the US, many states find it difficult to regulate it with tribe-state arrangements.

There is no doubt that Indian casinos are here to stay. 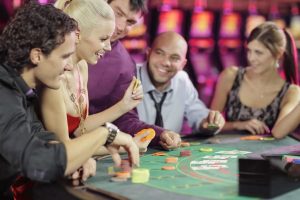