The gaming world has experienced incredible changes in the last several years because of digital technology and the internet.

People can have fun and find information quickly.

However, we can still derive great ideas from the past.

Today’s online slots with arcade themes have proven this point.

We will see how modern-day gamers are having fun playing games that are inspired by arcade games.

Arcade gaming emerged in 1978 with the introduction of Space Invaders by Tomohiro Nishikado.

The game was the best and most successful video game at that time.

The developers released it numerous times and inspired other video game developers in the industry.

Players use a laser cannon to defeat aliens and earn points.

Japan’s Taito Corporation released the game and got their inspiration from Breakout, Star Wars, and The War of the Worlds.

Playtech created the online version of the game. Players can visit online casinos and defend their planet from invaders.

The planet is the most valued symbol because it can multiply your stake by 150.

The game’s distinctive features include the UFO Wild and Invaders Turn Wild.

Retro gaming has re-emerged in the form of online slots.

You can share your thoughts on today’s arcade themed slots in the online gaming world. 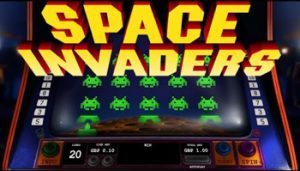